Beginning from Capri, explore this enchanting region of Italy, hiking trails that take you off the beaten path; from the Isle of Capri to the quaint and charming villages along this dramatic stretch of coastline, follow in the footsteps of writers, artists and romantics who have found in this sun-drenched region stunning vistas, mouth-watering cuisine and a culture that is unique and special.

Moderate level: 3 to 6 hours of hiking each day.

Please note: Final itinerary is subject to revision; any changes made are done so in an attempt to provide the best possible trip given route conditions and available services. Due to the nature of our business and exchange rates, prices are subject to change. All prices quoted are U.S. dollars but we gladly accept payment in Canadian dollars also. If you have any questions before making your reservation, please contact us at info@randonneetours.com or by telephone at 604.730.1247.
Getting There This trip starts in Capri. We recommend flying into Rome or Naples; trains from Rome take 1h30 to Naples and go throughout the day. The ferry (hydrofoil) from Naples to Capri takes about 45 minutes. Your confirmation package will provide additional planning information.
1

Capri
“Ever since Caesar Augustus discovered the charms of this small, flowering island in the Bay of Naples and purchased it in 29 B.C., the rich and famous have moored in its two inviting harbors, climbed its steep streets to admire its cascading flowers and plants (more than 800 species), taken in dazzling views of the bay and neighboring islands, sat on its sun-baked terraces, or swum in its clear turquoise waters.” NY Times

Arrive in Capri from Naples by ferry with a spectacular view from the boat as it makes its way through the Bay of Naples over to the island of Capri. Take a walk around the southern part of the island with fabulous views of the stunning coastline and finish up with a visit to the former Villa of the Roman Emperor Tiberius who ruled from Capri from 27 to 37 AD. Dinner options include da Gemma, Graham Greene’s favorite restaurant during his many years in Anacapri.
Hiking Distance: 5 km; 180 m *

Anacapri
Spend the day in Anacapri exploring the western side of the island by foot on well-maintained and stunning coastal trails, which give information and insight into the island’s unique microclimate and wildlife, as well as its fascinating history of defensive forts dotted along the trail. Depart from Capri by boat to your next hotel on the mainland (this makes the next day’s hiking logistics much easier).
Hiking Distance: 6.2 km; 200 m; Add-on option: 7 km; 80 m or 9.8 km; 340 m.*

Positano
Take a short transfer to the beginning of today’s walk, which is one of the most stunning trails in the region, the Pathway of the Gods. This spectacular walk reaches an altitude of 650 m to offer fantastic views of the coastline as well as the charming town of Positano which you will descend to by foot. Enjoy a well-deserved plate of seafood pasta and a glass of crisp local white wine in Next2, Positano’s most stylish new restaurants.
Hiking Distance: 9 km; 220 m.*

Santa Maria del Castello
Get ready to be challenged today on one of the more invigorating climbs of the week, which passes from Montepertuso through the small village of Santa Maria del Castello, with an altitude gain of 420m. This walk passes through buccolic and tranquil rural countryside away from the hustle and bustle of the coastal towns. Optional Cooking course: This afternoon, learn how to cook linguine tonno olive e capperi or pasta fatta in casa gnocchi with Felice Murano a wonderful cook featured on National Geographic Traveler. Contact us for more information.
Hiking Distance: 8 km.*

Amalfi to Ravello
Leaving the town of Positano by boat today, you will arrive in the town of Amalfi, which has a long and rich history dating back to its Roman origins. We’ve arranged for you to meet with a local guide here who will share more about this former autonomous state and who will also accompany you on today’s walk from Amalfi to Ravello through the Vallee delle ferriere national park. In Ravello, dinner options abound including Babel Wine Bar, our favourite.  Optional full day cooking class with Mama Agata. Pick vegetables from her garden, learn how to make your own Limoncello, savour a delicious meal, and listen to Mamma’s stories about cooking for celebrities! Should you wish to add a day to include this, we can do. Hiking Distance: 10.8 km; 775 m.*

Ravello
For those looking to get some more exercise in before the trip ends, today’s loop walk to the charming coastal town of Minori is a short but vigorous walk descending and ascending the many plentiful steps in this area. You can also take time to relax in the picturesque town of Ravello, explore the beautiful grounds of the historic Villa Cimbrone and sample the best of those luscious local lemons with a tasting of the infamous Limoncello liquor. Ravello is well known for its music venues, including the spectacular outdoor stage overlooking the sea at Villa Rufolo, the futuristic curved-dome auditorium designed by Oscar Niemeyer and other intimate spaces; what better way to finish your trip than a concert here!
Hiking Distance: 4.5 km; 350 m.*

Depart from Ravello and possibly visit the ruins at Pompei before departing from Naples. 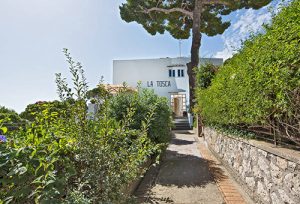 Hotel La Tosca is located just a few steps away from the center of Capri. The famous Piazzetta and all of the island's most luxurious shops are within easy walking distance. 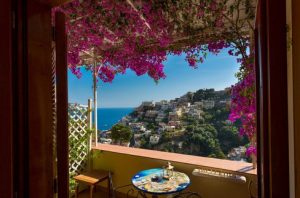 The rooms here are large and luxurious, with hardwood floors and a smart décor. Breakfast is served on a balcony overlooking the village of Positano. You’ll enjoy the location, and the welcome of Tiziana, owner of this B&B. 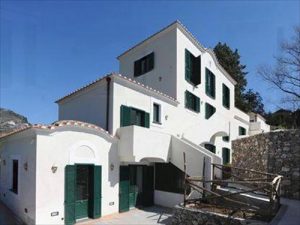 Formerly a farmhouse, this property has been fully restored and now offers large comfortable rooms with vaulted ceilings and modern washrooms. 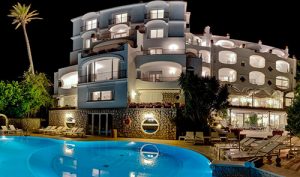 This 4 star hotel is located in a peaceful location only a few minutes away from the famous piazzetta. The hotel enjoys superb views of the sea from the guestrooms and from its terraces bordering the swimming pool. 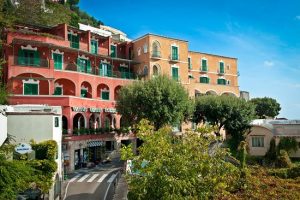 This quiet 3 star family run hotel is centrally located in Positano and within walking distance to the beach and the pedestrian area. The hotel combines modern comforts and has impressive vaulted ceilings and tiled floors. Managed by the D'Aiello family since 1936. 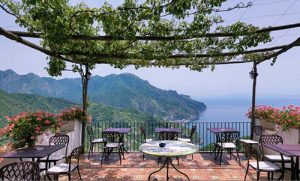 This family-run 3-star hotel boasts spectacular views across the Amalfi Coast, which you can admire from the spacious terrace. The hotel features a traditional restaurant, serving wonderful Mediterranean cuisine. 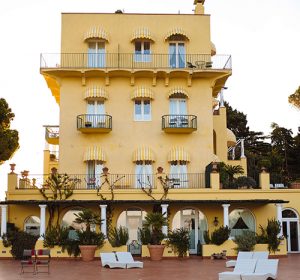 One of Capri's most luxurious hotels and a member of Relais & Chateaux. Well appointed rooms, fine cuisine, impeccable service and a breathtaking cliff edge position offer stunning views across the entire Bay of Naples. After a challenging hike, enjoy a dip in the wonderful infinity swimming pool and pamper yourself at the spa. 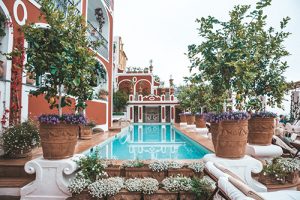 Originally an 18th century private residence, Le Sirenuse is a luxurious 5 star hotel which has delightfully retained the atmosphere of a grand family home. Located in the heart of Positano with breathtaking views, its white-washed walls, arched and vaulted ceilings complement the antique furniture and works of art throughout the hotel. Member of The Leading Hotels of the World. 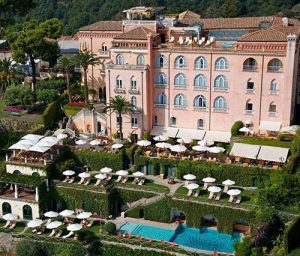 Palazzo Avino is a 5 star luxury property (often taking top honors for Italy on the T+L 500 list). It is situated in what was once the aristocratic quarter of Ravello, perched high up on the cliffs some 350m above the sea. The hotel has beautifully decorated rooms with hand made Vietri tiles, antique furniture, brass appliqués and the finest quality Italian linen and textiles. The hotel's 1 Michelin star Rossellinis Restaurant serves exquisite and beautifully presented cuisine. 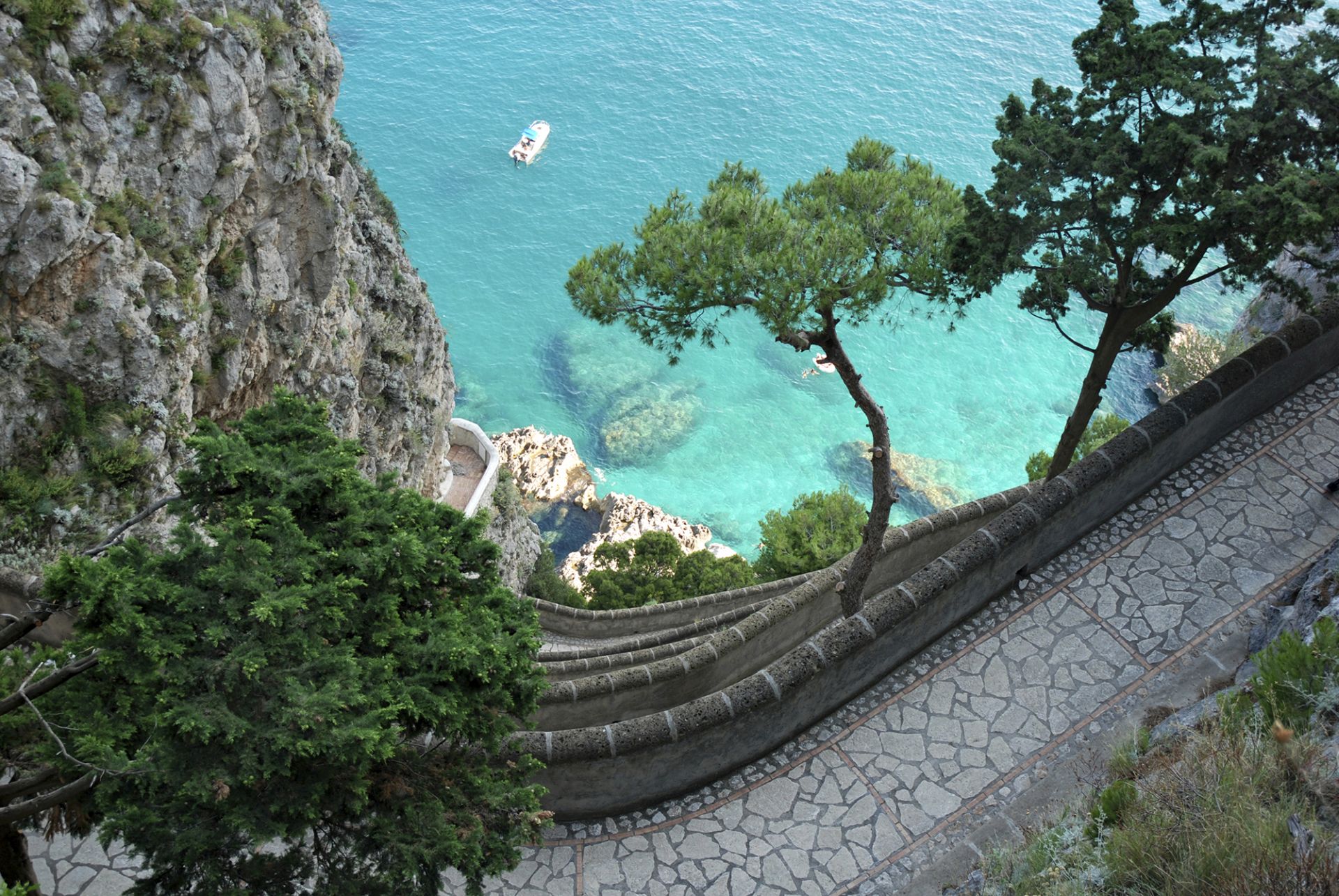 “The Hotel Mamela on the Island of Capri may be the best hotel experience we have ever had. It was perfect. Quiet. Beautiful. Wonderful service. Breathtaking views. All the other hotels were fine… but Mamela was a particular stand out. Both Fabian and Michele were extremely helpful. Great working with them. The hotels were great, all the people we met were very good. Everything went off without a hitch anywhere. Overall we were quite pleased.”

“As we approach the end of our trip, I am writing to you to express our thanks for a wonderful trip you all organized for us. We ended our last hike today in the beautiful trail from Ravello to Minori. All trails selected were wonderful with breathtaking views. Each trail had its own magic and beauty. I would like to recognize the excellent, knowledgeable Mila, Michele and Maurizio. Michele is so much fun and a wealth of information. A wonderful sense of humor! The hike with Maurizio was particularly special – he made it an unforgettable day and paced the hike in a way that was good for everyone. All arrangements were flawless and the bags reached the destination with no hickups. We received the best attention at all the hotels with rooms with wonderful views. The staff greated us in a warm welcoming manner. I do not remember their names as they were all helpful and friendly. Thank you all!”

“The first accommodation (Caesar Augustus) is the most amazing property I have ever seen, and I regret that I didn’t have more time to enjoy it. Our Area Manager was tremendous, our walk with her was very special.” 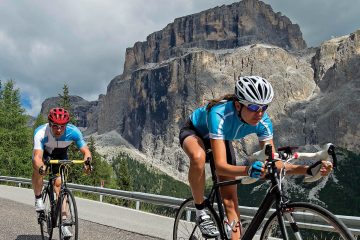 The Dolomites are jagged and spectacular mountains, 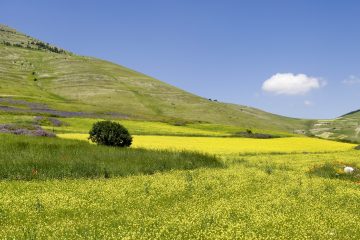 On Day 4, your ride takes you 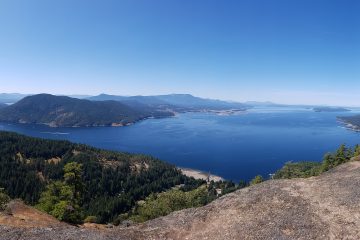 Journey to a place where lush forests
Trip starting at
USD $2,595
Detailed Itinerary
Book This Trip